I wrote about Edible Stories and their James Bond themed dinner at least twice, so it’s only fair that I actually tell you a bit more about the event as seen through my eyes. Ben and I both enjoy James Bond films (he a bit more than me, but at least I don’t fall asleep while watching them, which is always good), so it’s no surprise that we booked the tickets for dinner as soon as we found out about it.

If you don’t want to miss any events of this calibre, you better install the YPlan – Live Your City app on your phone as it informs you about events all over London (or Bristol, NYC and San Francisco) so you’ll never miss theatre, comedy, culture, food+drink, film, music or nightlife entertainment. The benefits of the app don’t end there as they often offer discounts for the events as well, so you’ll end up saving a bit.

Another good website to go for information about great events is Design My Night, a UK Nightlife Guide.

But enough about apps and websites where you get to hear all about whatever’s going on, let’s get back to our Saturday night.

The For Your Eyes Only dinner was due to start at 7.30pm, so we got dressed, they suggested black tie for men and cocktail dresses for ladies, hopped on the tube and headed towards a private members’ club in Covent Garden. 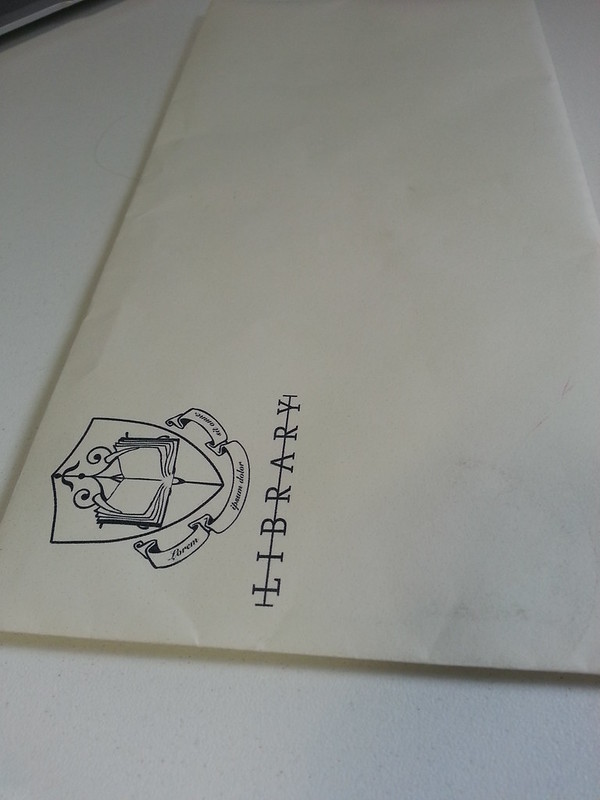 The event was held at the Library on St. Martins Lane and the setting couldn’t be more perfect. Library was funded in 2014 as a hub for creativity and innovation. It’s dark and filled with comfortable armchairs and sofas, bookshelves, an eclectic mix of artwork and bespoke furniture. However, bookshelves filled with numerous books were what caught my eye (if you read this blog, you know I am a proper bookworm). To shorten this description, let me just say that Library has it all, from lower ground floor restaurant to a quiet terrace and bedrooms for members to stay over. As it’s a private members club you need a sponsor to be able to join (or go for an event like this one). 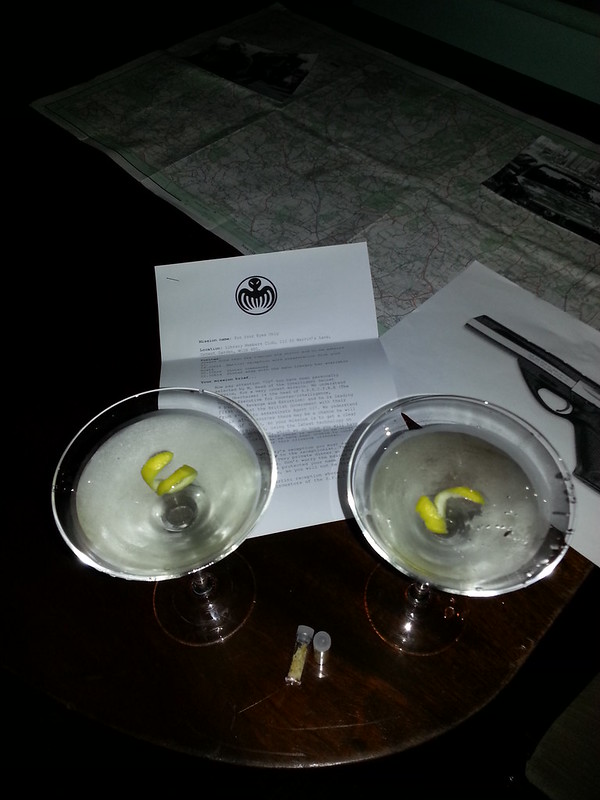 But I digress again. We didn’t want to be late, so we walked through the door with twenty minutes to spare and were promptly taken to the bar by the host. As this was no ordinary event, we were first given an envelope with two antidotes to use with our second course as well as a detailed description of our mission. To make sure we’re proper agents, our fingerprints were taken on an iPad and only then were we allowed to grab our Martinis. And uf, it was strong. I’m not used to drinking liquor like this, so I was cautiously sipping it while browsing the photos and clues that were on the walls and desks in the room we were taken to. James Bond must have some serious alcohol tolerance to be able to perform his duties as I was unable to even finish the drink even though we were given some canapés. 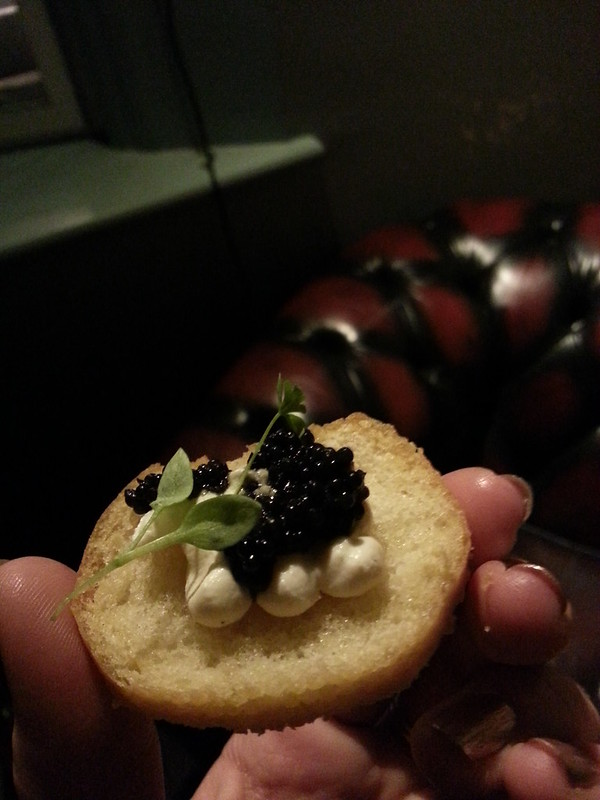 We only had a few minutes before other guests started arriving and the little room filled with chatter and people trying to take photos of one another. Can you guess what the mission objective was?

After caviar canapés, which were yum, we were taken to the restaurant and shown to our seats. 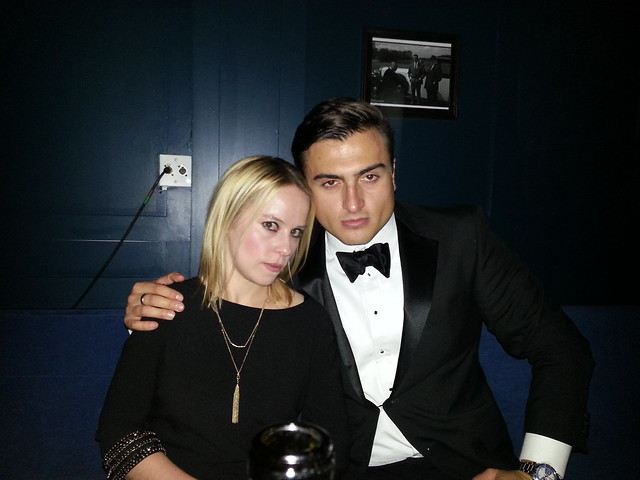 The restaurant was also decorated in James Bond style. There were pictures on the wall, S.P.E.C.T.R.E. logos (even on waiters’ ties) and punters dressed in black tie, so the atmosphere was perfect. 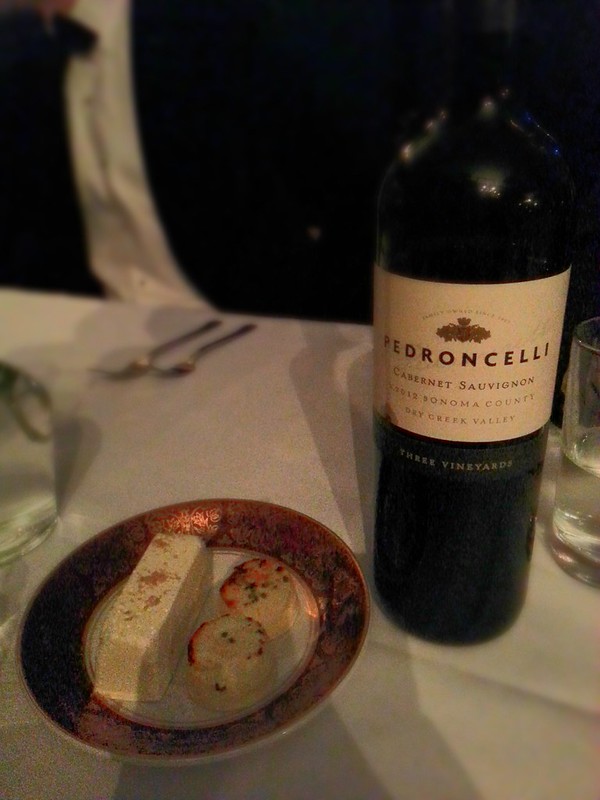 The starter was smoked pigeon (not foie gras terrine shooting from revolver shaped toast, which was a wee bit disappointing). Pigeon was covered with a tumbler filled with smoke, which added smoky flavour to the dish. Meat was accompanied with beetroot, which was lovely. 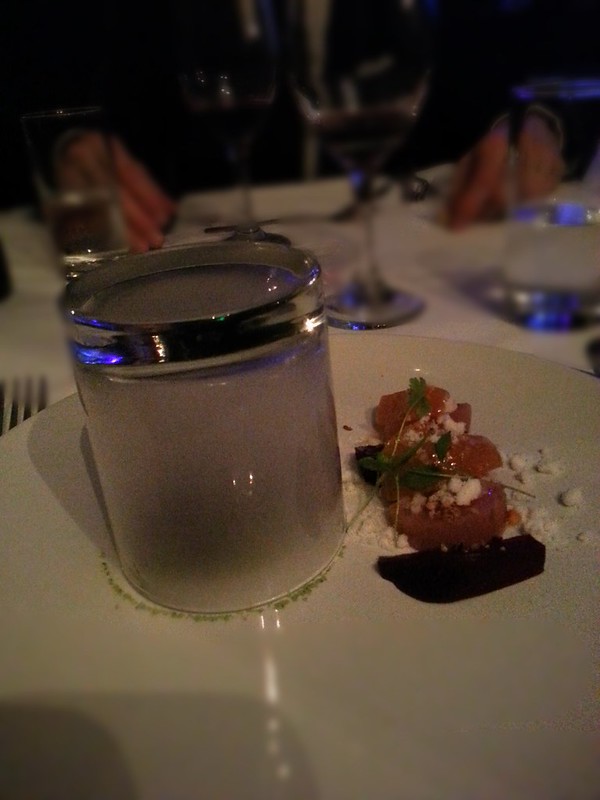 The second course was a palate cleanser. Lemon sorbet served in a martini glass with plenty of vodka. We had to use the antidote and sprinkle it in vodka. The trick here was to melt the sorbet before drinking it (unless you really enjoy vodka, which I don’t, not on its own anyway). 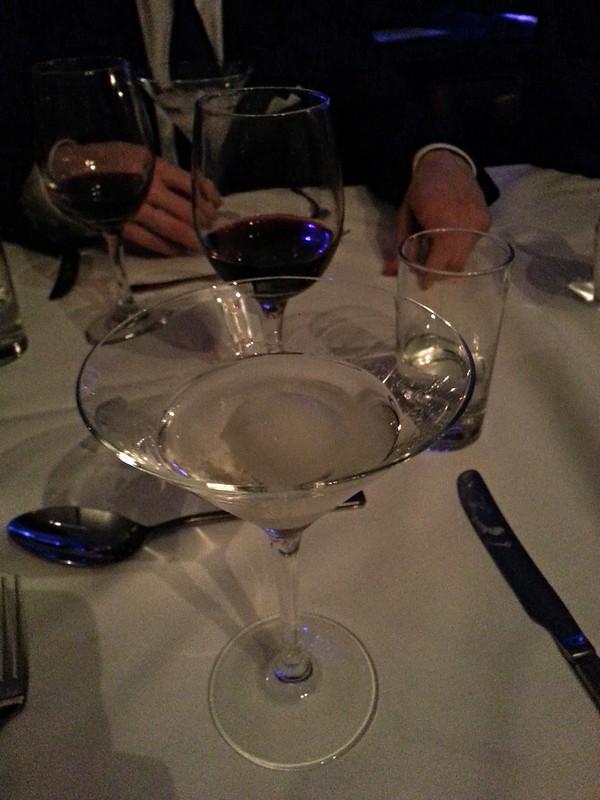 Main was beef braised in Macallan whisky with truffled dauphinoise potato, sautéed diamond courgette and onion pearls. I loved the potatoes, but my beef was pretty dry. Ben gave me a bite of his and it was alright, so I guess I was just unlucky. 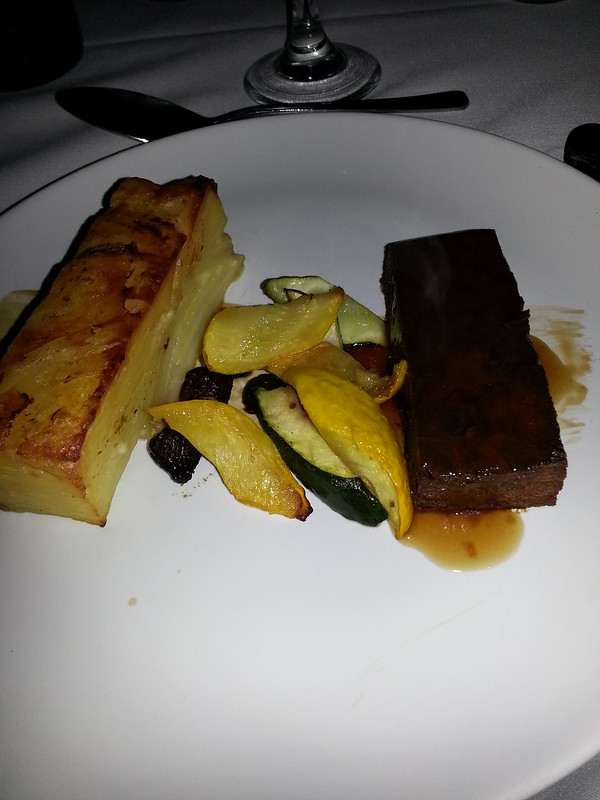 My favourite dish was dessert, a golden honeycomb mousse with popping candy and dried fruits in a chocolate dome witting on coconut tapioca. They poured hot berry coulis over the ball (or so did the menu say, looking at the photos, it looks more like white chocolate), which helped open the chocolate ball and reveal its insides. It was delicious. 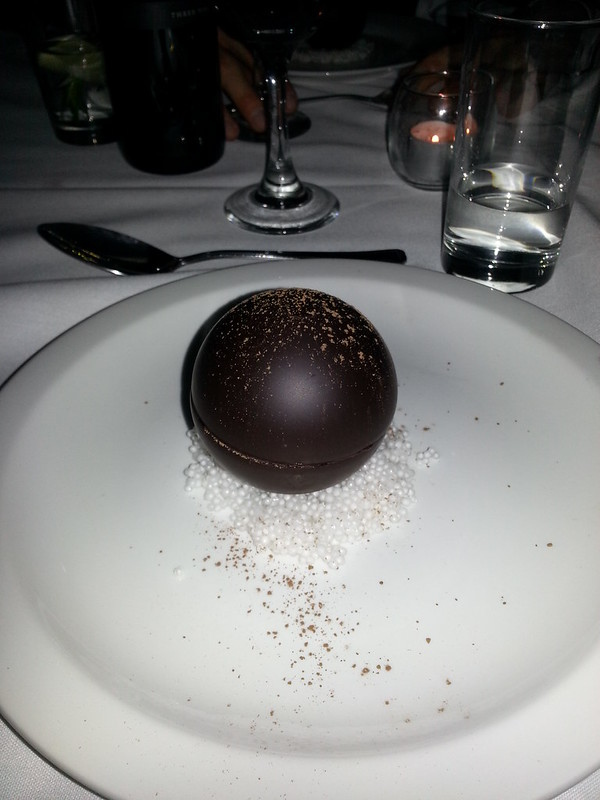 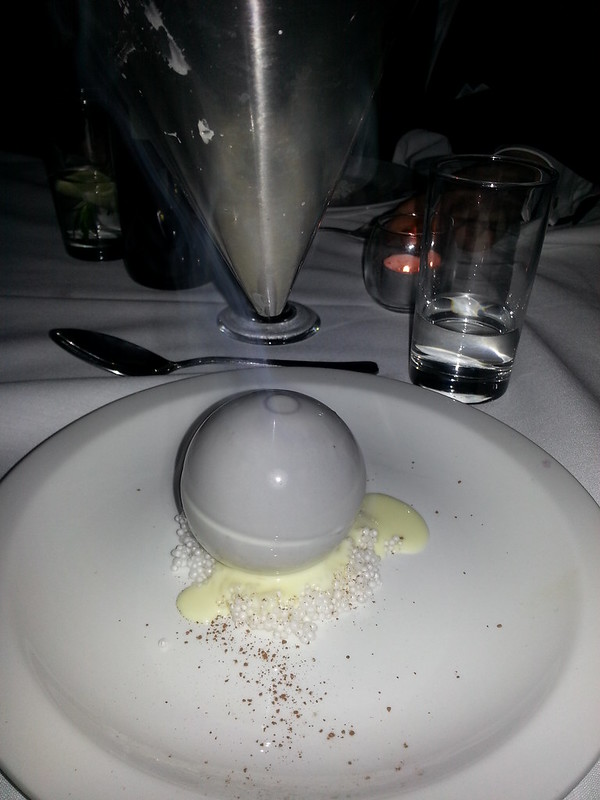 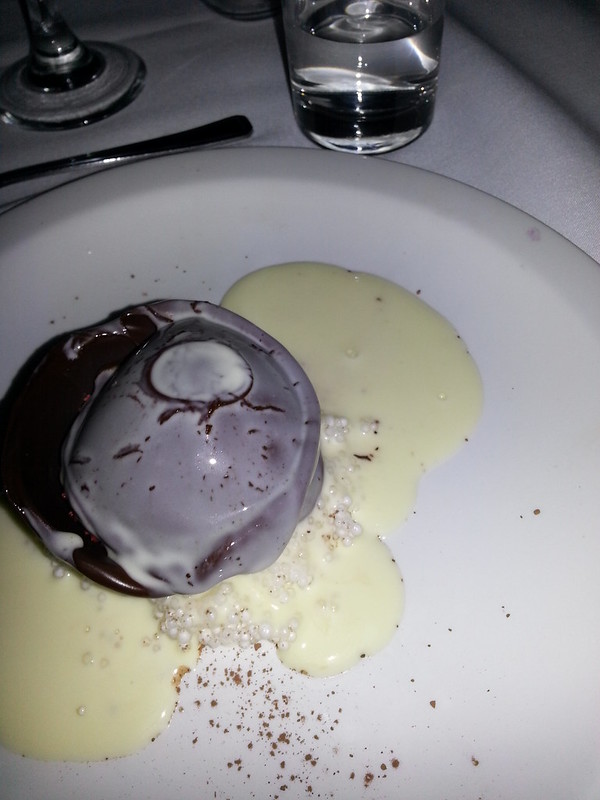 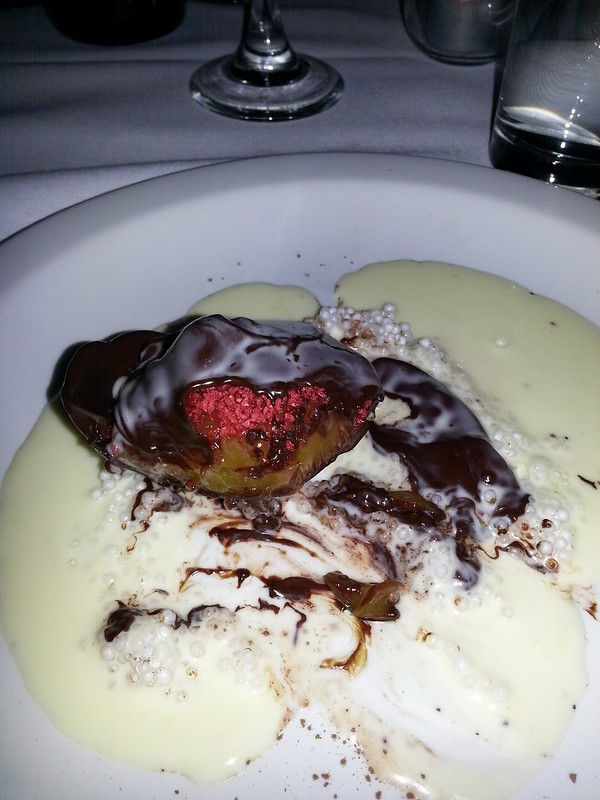 What I loved about the event the most was talking to a bunch of people that I wouldn’t otherwise have a chance to meet. There were tourists, people working for finance firms, students, a birthday party, all in all an interesting selection of people. I even got a book recommendation that’s already on my wish list 🙂